Skip to content
Anterior and Vertical Translations of the Cervical Spine Increase Stresses up to 4.25 Times; Likely Accelerating the Development of Spinal Arthritis and Disc Disease 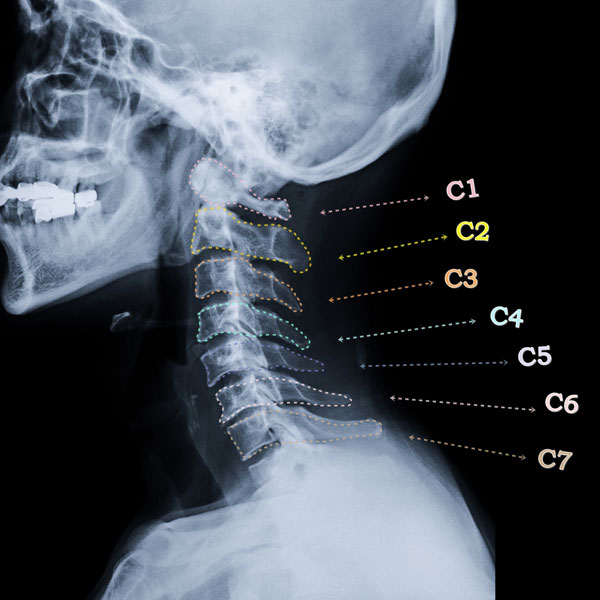 The presence and extent of spinal arthritis and degenerative disc disease (SADD) is a common occurrence in adult populations and the rates increase as we age.

However, SADD is not an inevitable consequence of just getting older as the general rule of thumb is that the better you take care of your body, the longer it will last and take care of you. In the scientific literature there is not a clear linear cause and effect correlation between the amount of SADD and the amount of patient dysfunction or health disorders. However, in general, there is mild to moderate correlation between the extent and levels of SADD and different human health and disease conditions such as neck pain, stiffness, diability, etc.1-7 Perhaps more importantly, the extent of SADD may signify a serious breakdown of your body.

One investigation identified a correlation between abnormal/altered auditory evoked brainstem nerve potentials and the presence of cervical spine SADD; indicating that nerve conduction velocity and amplitude was altered in the presence of SADD.7 Likewise, several studies have shown a correlation with cervical spine arthritis and disc disease (SADD) and myelopathy and heart disease and related disorders.8-11 For example, in a recent surgical intervention study for patients suffering from cervical spondylotic myelopathy (spinal cord impingement due to SADD), decompression surgery was found to improve patient hypertension. These findings indicate that SADD in the cervical region can alter the sympathetic nervous systems ability to maintain blood pressure at normal levels and that hypertension can be due to SADD.8

These important studies demonstrate that degeneration of the cervical spine is associated with ‘nerve interference’ and potentially serious cardiac and vascular health disorders.7-11

It is noted that moderate-severe radiographic determined spinal SADD causing cervical spondylotic myelopathy can be a serious health disorder associated with a myriad of clinical conditions as reported in the cardiac studies above. However, common sense dictates that moderate to severe SADD causing myelopathy always begins as more mild form of SADD. It is suggested that the prudent clinician should do their best to control for specific risk factors linked to the development and progression of spinal arthritis and disc disease (SADD). Patient relevant risk factors for the development and progression of SADD include at minimum the following: diet, smoking, body mass (obesity), physical activities, and abnormal spinal and postural alignment.8-13

One of the best solutions to control for the progressive development of Spinal Arthritis and Disc Disease (SADD), is to insure that you have a proper cervical spine posture and a proper cervical lordotic curvature. Figure 1 demonstrates the normal versus abnormal posture alignment and deterioration as we age. 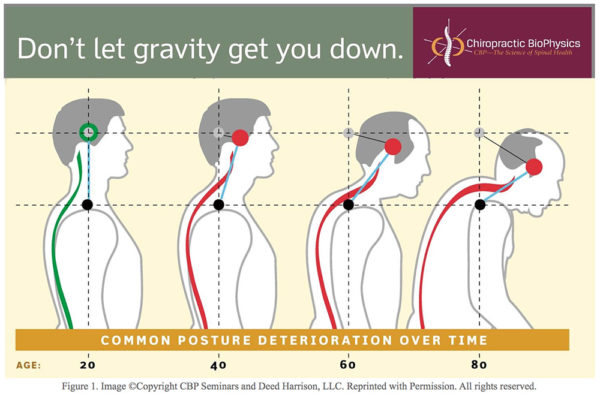 In a 2002 spine modeling investigation, Harrison and colleagues13 digitized measurements from lateral cervical radiographs of three different patients with different posture alignments of their cervical spine: 1) a normal health cervical curve and posture alignment, 2) a subject with a straightened or vertical translation of their cervical curve, and 3) a subject with large abnormal anterior head translation posture were used. An engineering model using ‘short-compression-block equations’ was developed in order to calculate axial loads and bending moments on the vertebral bodies of cervical segments C2-T1. Figure 2 below depicts the normal cervical curvature with no head translation and normal healthy discs and a case with vertical translation (straight neck) and anterior translation. Note the extensive spine arthritis and disc disease in this case. Since spinal arthritis and disc disease (SADD) is commonly found at areas of altered stress (force per unit area) and strain (deformation), an engineering analysis is necessary to determine the exacting loads acting on the cervical spine vertebra in different spine configurations. The model developed looked at the loads on the cortical (outside covering of the vertebra) and the medullary (spongy vertebra core) bone of the cervical vertebra C2-T1.

The model developed by Harrison and colleagues identified that the stresses (forces per unit area) acting on the cervical vertebra and discs in translation postures are very large in the lower spine segments (C2-T1) and opposite in direction compared to a normal lordosis. It was found that the anterior or forward head translation posture was associated with the largest combined stresses; their model predicted that the stresses were up to 4.25 times greater compared to the normal, healthy lordosis of the cervical spine.

How Can You Get Help for Your Altered Posture and Spinal Arthritis and Disc Disease and Health Disorders?