Symptoms oftentimes begin after a physical trauma to the musculoskeletal system; such as a motor vehicle collision, aggressive slips and falls, etc. In other cases, symptoms can gradually increase over time. Of interest, women are much more likely to develop fibromyalgia.

The majority of cases with fibromyalgia also suffer with tension headaches, temporomandibular joint (TMJ) disorders, irritable bowel syndrome, anxiety and depression. Problematically, no permanent cure for fibromyalgia has been reported but medications, exercise, relaxation and stress-reduction, dietary modifications, and counseling can help.

Recently, a breakthrough randomized trial looking at a new treatment for fibromyalgia sufferers was published out of Cairo University in Egypt. In this project 80 patients aged 40-65 years of age suffering from chronic (48 months or longer) fibromyalgia syndrome were evaluated and treated. To be included in the study, all patients had to have a definite and significant forward head posture and abnormally straight cervical lordotic curve (neck curve). The 80 subjects were randomly assigned to the Control or Experimental group. Both groups received a multi-modal program including three things: Cognitive Behaviour Modification, Functional Exercise program, and Educational Sessions. These three interventions were performed 1-3 x per week for 10 weeks or up to 30 sessions.

Additionally, the Experimental group received the Deneroll cervical traction. The denneroll cervical traction device is a physician (Chiropractor, Medical Doctor, etc…) supervised orthotic that is known to improve the alignment of the cervical spine. The 40 patients in the Experimental / Denneroll group, used the Denneroll 3 x per week for 30 weeks or 30 sessions under the direction of the treating therapist.

The study outcomes were impressive in the Experimental group. The Cervical lordosis was improved after 10 weeks of supervised Denneroll usage by 13° (See figure showing improvement in the cervical curve following treatment). Anterior head posture was improved in both groups at 10 weeks but more so in the Denneroll group. The Fibromyalgia outcomes: FIQ, PCS, algometric score, PSQI, MFI, GHQ, BAI, BDI, and VAS after 10 weeks— indicated that the positive changes were equally successful in both groups at relieving the signs and symptoms of fibromyalgia. However, At the 1-year follow-up, the Experimental / Denneroll group was found to have much greater and statistically significant improvements in all of the Fibromyalgia outcome measurements. The results indicated that patient pain, disability, general health, anxiety, and depression were all improved in the FibroMyalgia patients who received the Denneroll cervical traction to restore the cervical curvature. “The results suggest that the addition of Deneroll cervical extension traction to a multi-modal treatment program is beneficial in treating patients with fibromyalgia syndrome.” said Professor Ibrahim Moustafa, PT, PHD, lead author of the study.

How Can You Get Help?

Chiropractic BioPhysics® corrective care trained Chiropractors are located throughout the United States and in several international locations . CBP providers have helped thousands of people throughout the world realign their spine back to health, and eliminate a source of chronic back pain, chronic neck pain, chronic headaches and migraines, fibromyalgia, and a wide range of other health conditions. If you are serious about your health and the health of your loved ones, contact a CBP trained provider today to see if you qualify for care. The exam and consultation are often FREE. See www.CBPpatient.com for providers in your area. 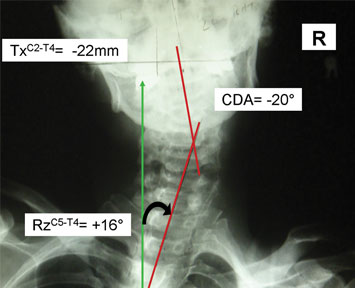